Nostalgia’s a dangerous thing, but the mere sight of a lapwing triggers memories of clouds of them billowing up behind tractors in the fields of my youth, when the world was (obviously) perfect.

There’s everything to love about the lapwing. Its scientific name (Vanellus vanellus), its ‘more to it than at first meets the eye’ plumage, its perky little squiggle of a crest, and particularly its springtime courtship display.

They swoop. They dive. They show off in an effort to convince potential mates of the superiority of their genes. And all the while they sing this extraordinary song, from which they get their old nickname ‘peewit’. To me it’s reminiscent of the early 1980s video game Galaxian. I love it.

All the lapwing noises you could possibly want.

Few things lift the heart of the summer-lover more than the return of the martins and swallows each year. And even though the sight of them sends the hearts a-fluttering, there’s a lot to like in their sounds as well.

The first to arrive is the sand martin. These bank-nesters generally start trickling in during March. Their vocalisations, whether call or song, have a dry, rasping quality, sometimes interspersed with excitable twittering.

House martins generally come a few weeks later, around the beginning of April. They have a dark blue satin sheen, distinctive white rumps and inexplicably feathery feet. They build mud nests under the eaves of houses and chatter away eagerly all summer.

But despite the undoubted and extravagant charms of both those birds, for many people the flag-bearer for summer is the swallow. Their swooping flight and long tail streamers catch the eye, daring you to stop looking, and their song is equally entrancing, a sweet chattering interspersed with guttural noises & clicks. It reminds me of the sound you get when you press play & fast forward on a tape recorder at the same time (a sound now largely lost to humanity).

While the song has its charms, you might be more likely to hear its flight call: ‘tsivit’ (or some other convincing transliteration).

It’s worth pausing for a second to remember that all these birds – and many other summer visitors – have come here from Africa. Africa. We take it for granted that they’re going to undertake that monumental journey every year. The least we can do is say hello when they get here.

Feast your ears on the twitterings of the sand martin, house martin, and swallow. 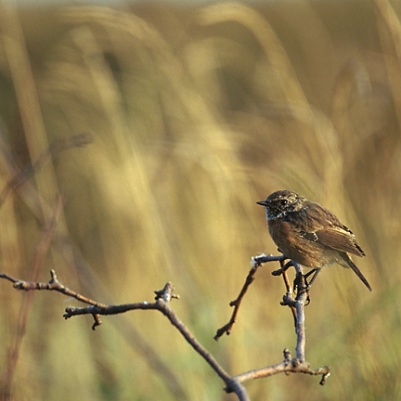 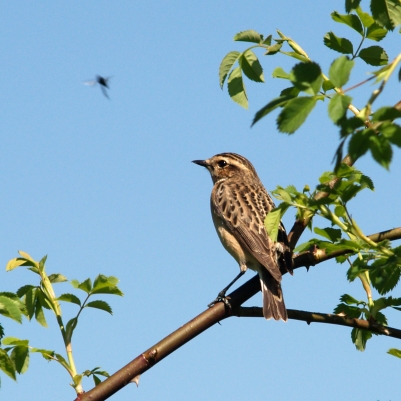 We need to have a chat. Two, in fact.

The stonechat and whinchat are perky, robin-sized birds. Their hobbies include perching on things and flicking their tails. Their biggest hope is for world peace.

Stonechats like lowland heaths – they’re particularly fond of gorse. Whinchats prefer grasslands & brackeny bits. The stonechat is widespread, & here year-round, while the whinchat’s a summer visitor, heading for Wales & the north, but turning up in the south on the way through.

The stonechat’s song is a bit scrabbly and indeterminate – it has a similar feel to the dunnock’s, though the phrases are shorter.

The stonechat gets its name from its call, which sounds like two stones being knocked together.

The whinchat’s song has a rasping quality among the warbling. Short phrases, starting slowly, cut off abruptly. They often sing at night.

The whinchat’s call is similar to the stonechat’s, but the click, to my ears, is a bit softer, and the preliminary note more whistling.

The wheatear, another summer visitor, is one of the most upright birds you’ll ever meet.

Its song, like so many of these birds, is a bit jumbly. It often starts with a single note, though, like this one. ‘Tsip-a-jubblydubblytwaddlywadder.’ And there’s the odd click and squeak in those short phrases, too.

You don’t need me to tell you that the wheatear’s name has nothing to do with wheat or ears but is in fact a prudish corruption of the original ‘white arse’, do you? No? Good.

So that’s the wheatear. Look out for them on open stony ground in the summer.

You will find all the wheatears here. 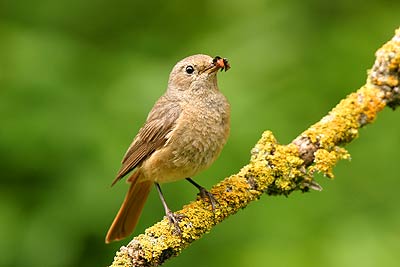 Redstarts are another early April arriver from Africa, so if you live in, or frequent, woodland (especially in Wales, the North and parts of Scotland) then keep an eye and an ear out for these tail-twitching crackers during the summer months.

The black redstart, on the other hand (in Britain, at least), is more a bird of inner city and industrial locations.

The black redstart isn’t ‘common’ common, but it’s worth listening out for their jangling song the next time you’re at a railway or power station, or hanging round a disused factory, as you no doubt do all the time.

Redstarts to fulfil your wildest dreams.

Like the chiffchaff and willow warbler, you’re going to struggle to tell these two birds apart by looking at them.

When it comes to their noises, though, it’s a bit more clearcut. Both birds make a variety of sounds, but these are some of the more common ones.

The willow tit has a nasal, rather hectoring call, often with a high-pitched ‘tsi’ just before it.

The willow tit also has a piercing, whistling song.

The marsh tit’s song, on the other hand, has similarities with both the great tit’s and coat tit’s – a fast two-noter.

And here’s the coal tit.

One of the marsh tit’s calls has, like the willow tit’s, a nasal, complaining quality, but is much shorter.

There is, inevitably, much more to it than that, but I reckon you’ve had enough for the moment, and besides, we have to get on to the cuckoo.

All the willow tit sounds here.

And all the marsh tit sounds here.

It is possibly the most famous British birdsong. When you hear a cuckoo, Sumer is, after all, icumen in – turn your speakers up to ‘lhude’ and write to The Times.

You probably don’t even need to hear the cuckoo’s song, but here it is anyway.

That’s that, then. Simple, beautiful, classic. No more to be said.

But wait. Do cuckoos by any chance make other sounds?

The female cuckoo has a distinctive bubbling call.

Here’s a recording with the male cuckoo’s two-note song, the female’s bubbling call, and the same male getting overexcited and adding a ‘cuck’.

Sadly, of course, you’re far less likely to hear these sounds nowadays. The cuckoo has declined in this country by 65% since the early 1980s. Not to get all eco-gloomy tub-thumpy about it (this is supposed to be a positive place, full of sweetness and light and fluffiness and ickle cutesy birdy-wirdies singing their ickle hearts out) but AAAAAGGGGGGHHHHHHHHHHH.

Nobody really knows the exact reasons for this decline, but the British Trust for Ornithology have been running a satellite tracking programme, tagging cuckoos and following their migration routes, to try and help is get to the bottom of it. It seems migration routes might play a significant role. You can read more about it and sponsor a cuckoo here.

Ready for more? Week 8 is here.

This is a free resource. However, if you enjoy it and would like to support it, you can buy me a coffee.

The recordings on this page were made by various people, and are used here under the Creative Commons Attribution-NonCommercial-ShareAlike license. These and many more can be found at the excellent resource xeno-canto.org 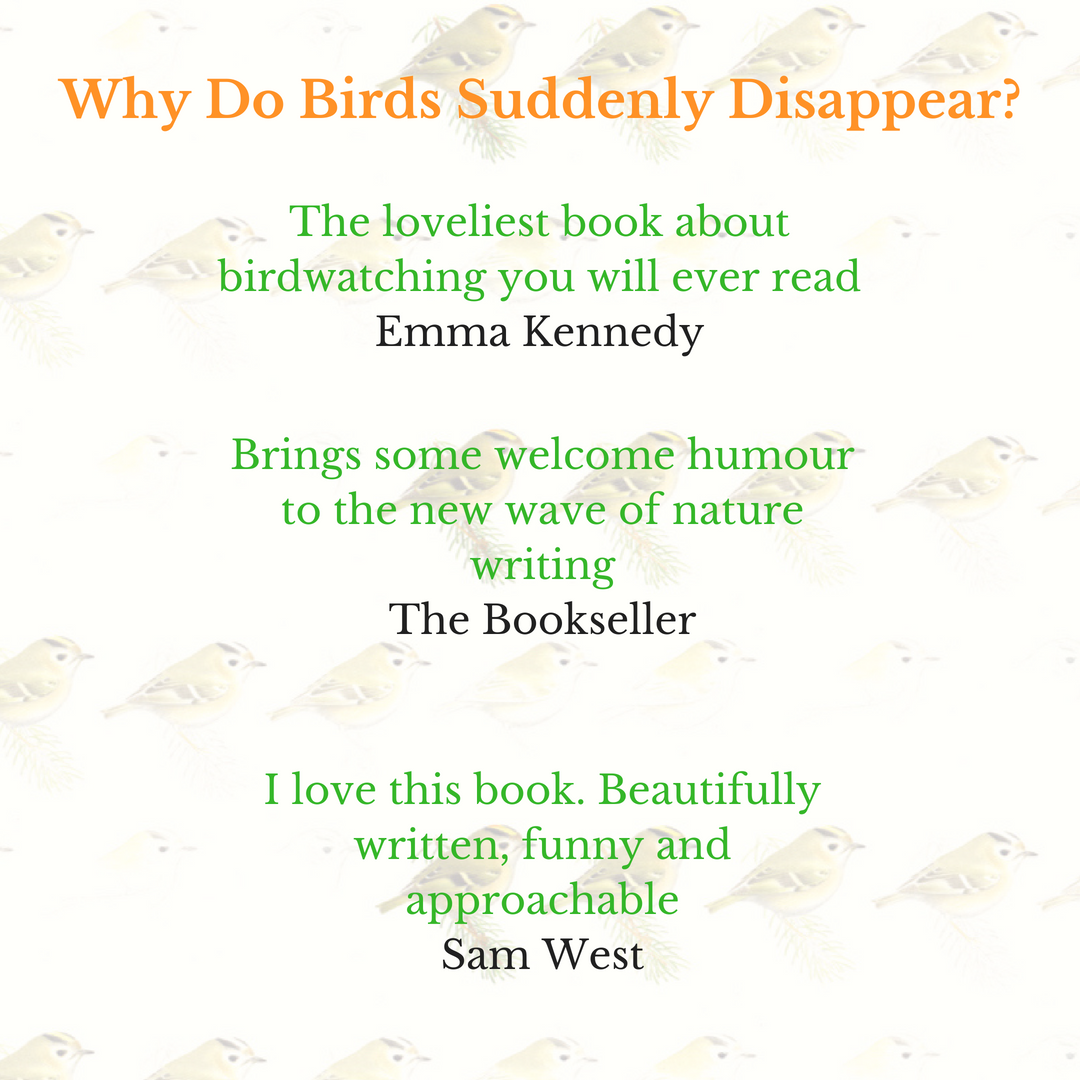